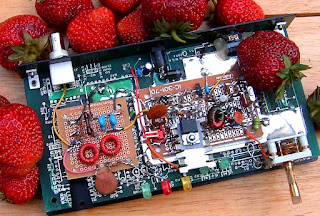 My Minimal-Art-Session rig shown here was made for class B of the QRP-MAS competition which is in May every year. In class B the transmitter should have a maximum of 50 components, and the fewer the number of components, the more points one will get per contact. With such simple rigs, only CW is viable.

This rig was made by combining ideas from several designs that I had seen and it was finished the same day as the competition. I ended up with 22 components in the transmitter except for the output filter. The rules say that no matter what, the output filter counts as three components. I guess this is in order that no one is tempted to simplify the filter too much and start emitting harmonics.

It was made directly on two experimental boards. The right-hand one is for the VXO and the PA and the left-hand board contains the output filter. The transmitter is housed in an enclosure which once was a network converter. The advantage was that there already was a BNC-connector and a power supply plug there. All the original surface mounted components were blown off with a hot air gun so that the original board could be used as a base for my boards.


My transmitter is made to give as close as possible to the maximum power of 5 Watts, but I ended with 3.5 Watts even though the IRF510 is capable of more. But there was not enough drive signal for that. I also had some problems with high frequency oscillations so therefore there is a series resistor to the gate and some extra decoupling which raise the component count. The transmitter frequency can be pulled about 1 kHz for each crystal. I have used it with an antenna tuner and a 75 m horizontal loop and with my Elecraft K2 as receiver. Antenna switching was manual.

I didn't really count on many contacts because I only had crystals for 3579 kHz, not for the QRP-frequency 3560 kHz. But surprisingly I had 6 contacts with D (Germany) and one each with ON (Belgium) and OK (Czech republic). The "best" rig component-wise that I contacted was DK0VLP with only 12 parts.

Next time I plan to make a tube transmitter - inspired by the AA8V/W8EXI One-Tube Transmitter - hopefully cutting the component count in two myself also.