QOD7 - Can you communicate with me in Norwegian?

Not so many nationalities are included in the exclusive group of countries with their own Q-code. I mean of course the QOD-code. I have never heard it used by radio amateurs, but it must have played a role some time ago in shipping.

The Q-codes date back to 1912 and were meant to be a short-hand for use in telegraphy. According to the list of Q-codes which Ralf D. Kloth (DL4TA) has on his web page, the meaning of QOD with a number added is: "Can you communicate with me in ... 0 Dutch, 1 English, 2 French, 3 German, 4 Greek, 5 Italian, 6 Japanese, 7 Norwegian, 8 Russian, 9 Spanish?" As a response to the question the meaning was "I can communicate with you in ..."

The reason for a separate code for Norwegian must be the historically large shipping fleet in Norway. This is still the case as graphically depicted in this overview of the Top 20 Ship Owning Countries, where we seem to rank as number seven - so QOD7 is appropriate!

But today all of them will QOD1.

Image from Wikipedia, user Karamell
Posted by Sverre Holm at 18:06 3 comments: Links to this post

Why do Norwegian callsigns end in A? 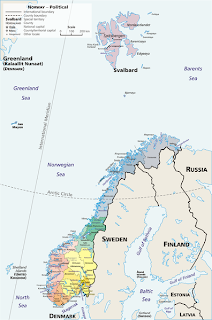 Well actually not all end in A, but almost all of the recent ones do. Amateur callsigns in Norway are not so well documented on the web, so here is a short explanation.

Norwegian callsigns are used in these territories:

Depending on where I go, my callsign may be LA3ZA, JW3ZA, JX3ZA, or 3Y3ZA. We don't have districts so the number does not mean anything, except for 0. Callsigns with 0 are were reserved for non-Norwegian citizens, but this has stopped so LA0 callsigns are no longer issued.

Usually the callsign starts with LA, but why do so many of the LA callsigns end in A?