From time to time I receive duplicate 'ghost' decodes at 100 Hz intervals on either side of the main signal. Last night I saw the phenomenon on 30 m. You will notice here that I have decoded the message: "TNX 73 GL" four times (press image for better readability):

Which non-English Morse characters are the most important ones?

The Morse code for the 26 letters of the English language and the digits, you can find everywhere, e.g. here on Wikipedia. All one-, two-, and three-symbol combinations are in use.

In the international alphabet all but four of the four-symbol combinations are used. They are:


The two or three first German letters are used in many other languages also, e.g. Swedish, Finnish, Turkish, Hungarian etc.


Note that the Ö/Ø Morse code is an O (---) followed by an E (·), usually written as OE. OE also happens to be how the letter is written if the proper symbol isn't available. That also shows the relationship with the French Œ, but that's a digression that has little to do with Morse code. Likewise, the Morse symbols for both the Ä/Æ and the Ü start with the non-accented letter and are AA and UT respectively.

I haven't called CQ for a long time on CW except in contests. Mostly I have just responded to DX calls with a super short "5nn TU" and that's it. But this Saturday I heard a presentation at the Norwegian Ham Meeting by Roland, SM6EAT about a Swedish initiative to increase CW activity. It is called Scandinavian Open CW Activity (SOCWA) and it has at present 452 members from Scandinavia in a wide sense of the word. It really got me interested in improving my CW skills.

So now I have started to call CQ SAX and have had my first long CW QSOs for years with SM and OH.

It is also amazing to look at the reverse beacon network and watch your own CQ being reported almost in real time from various Software Defined Receivers with CW Skimmers. Below is the result of the two CQs I have sent these two last days. 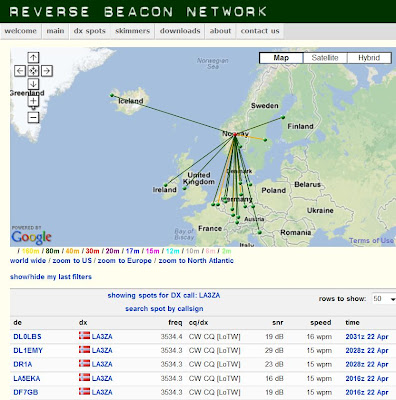 Posted by Sverre Holm at 23:09 2 comments: Links to this post

Sometimes it is crowded on JT65 on HF due to too little bandwidth. When only 2 kHz is available and each signal needs 175 Hz that's understandable. But then others seem to complain that some overmodulate their transmitters so that they occupy more than the 175 Hz, making it even harder to fit an extra signal in the band.

As I have been running a lot of JT65 lately on HF, I also have seen this phenomenon and it piqued my interest to try to understand what was going on. The image below shows such a strong station to the very left, at about -1000 Hz where the red marker is located. After some seconds I turned on the attenuator of my K3, so the signal was attenuated by 10 dB (press image for zoom).

It appears then that it is the JT65 decoder software which is too sensitive to strong signals. Now, I cannot really say that I understand all of the decoder code, but I think that it has to do with the way the power spectrum is estimated. The FORTRAN code for ps.f is listed below. It comes from the BerliOS repository for WSJT which has the same code for this routine as JT65-HF-Comfort: