TX6G on the Austral Islands of French Polynesia is calling for EU stations on 14026 kHz CW. I hear him well at level S7, but the pile-up stretches up to almost 14033 kHz. 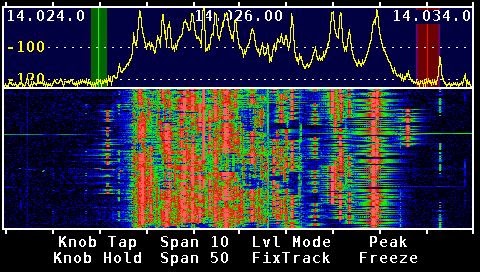 What can a small gun do to get through?

Posted by Sverre Holm at 07:40 No comments: Links to this post

Fantastic Conditions on 10 and 12 m

This last month has seen some of the most fantastic conditions I have ever experienced. Especially the higher bands have given world wide coverage. I haven't had that much time to operate from home, but despite this I have gotten many first. My recent verifications on the Logbook of the World testify to that.

Let's all hope it will last!

Posted by Sverre Holm at 15:37 No comments: Links to this post

Email ThisBlogThis!Share to TwitterShare to FacebookShare to Pinterest
Labels: propagation

The ultimatic mode is an alternative to the iambic mode for sending Morse code from a dual lever paddle. When pressing both paddles the last one to be pressed takes control, rather than the alternating dit-dah or dah-dit of the iambic mode.

In the K1EL Winkeyers there are actually three ultimatic priority modes. This is shown in the table below that comes from page 9 in the specification for the command for setting the PINCFG Register. (K1EL CW Keyer IC for Windows Winkeyer2 v23 10/5/2010). This is a de facto standard for interfacing to and controlling a keyer, as an example it is used in the K3NG Arduino Open Source Morse keyer.

K1EL has defined bits 6 and 7 for setting this up by remote command. I propose that the last possibility, '11', presently undefined and unused, be used for a new mode. This mode is "First paddle priority" meaning that the last paddle which is pressed is ignored. It can also be interpreted as an emulation of a single-lever paddle. I and others have found that helpful in eliminating errors when keying. See for instance "Single Paddle operation with Iambic paddles" by Larry Winslow, W0NFU, in QST, October 2009 and the Iambic to Single Paddle kit from WB9KZY or my earlier blog post "Single-lever and ultimatic adapter".

My proposal is that the bits for the ultimatic mode be used like this:

Posted by Sverre Holm at 22:28 No comments: Links to this post

German, Swedish, Danish, Norwegian, Finnish, and some Spanish characters in the display are now supported by the K3NG Arduino Open Source Morse keyer. I have worked with OZ1JHM, Hjalmar and K3NG, Anthony, in order to implement this using the 8 custom-designed characters of the LCD display (based on the Hitachi HD44780). This should satisfy the call I had for such support here on this blog last year: Which non-English Morse characters are the most important ones?

Here are examples using the phonetic alphabets of these languages.