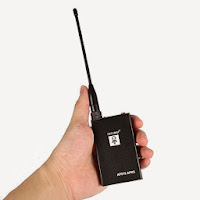 I got my AP510 APRS tracker a little more than a year ago. It kind of worked, but not very well in my car. But after the tracker got a new firmware dated 3 Nov 2015, it has become so much better. Now I can say that it is really useful.

Apparently, the Smartbeacon function didn't work properly in earlier versions of the firmware. With some good debugging and error reporting by KC5EVE, Mark, working with the software developer for the AP510, BG6QBV, the annoying errors now seem to be gone. This is all documented in the Yahoo AP510 group.

I have fitted mine with a 16-45 cm telescopic antenna and even when attached to one of the rear headrests in my sedan, the 1 Watt of output power tracks very well.

The map below shows a drive from Telemark, about 100 km west of Oslo, to Oslo with as good coverage as one can expect given the valleys and the availability of APRS digipeaters especially in the western part.

Posted by Sverre Holm at 22:22 No comments: Links to this post 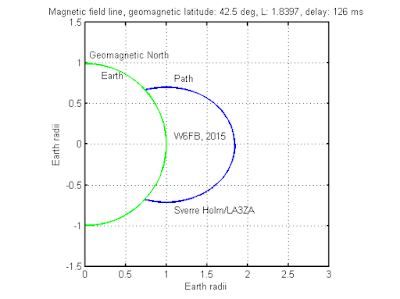 On 7. November 2015, several radio amateurs in northern California heard echoes in the 80 meter band. I was made aware of it by Jack, W6FB in Santa Clara, who recorded signals from K6YT some 25 miles away. According to W6FB, the echo effect was also heard north of Sonoma (several hundred miles north of him, reported by N6ZFO).

KM6I, Gordon, in Palo Alto also heard echoes of his own signals and recorded them. In his blog he analyzed the delay from the output of his transceiver and found 157 ms. He found that to be so close to the round-the-world time for signals of 138 ms, that he assumed that to be the cause.

I don't agree, so I took the location of W6FB at locator CM97ah (Santa Clara) as a starting point for computing delay. This is latitude 37.31 and longitude -121.96 and gives a geomagnetic latitude of about 42.5 degrees. Then I put it into my program for computing path length along geomagnetic field lines assuming a height of the reflecting ionosphere on the opposite side of 100 km. The result is shown in the figure and predicts a delay time of 126 ms. My estimate of uncertainty is +/-5 ms.

The delay value is slightly less than 138 ms and easy to confuse with a round-the-world path. The challenge with estimating delays like this from the signal is that amateur transceivers may have an unspecified delay between start of transmission and start of sidetone. Measuring on the audio output as done here, measures the sidetone, not the actual RF.

I discussed this source of error in my 2009 QST article "Magnetospheric ducting as an explanation for delayed 3.5 MHz signals." Therefore the measurement shown above may fit with 138 ms just as well as with 126 ms, it depends on the actual transceiver's delay.

Other properties of the echo, such as the amplitude of the echo which according to W6FB at times was louder than the direct signal, also point to the duct theory as the explanation.

Others have heard such echoes also:
Other posts on the theme: Magnetospherically Ducted Echoes or Medium Delayed Echoes
Posted by Sverre Holm at 23:46 No comments: Links to this post