Remapping of Keyer Speed Pot Range for the Elecraft K2 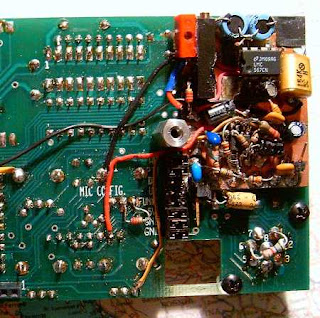 I am beginning to realize that I will never be able to exceed 20-25 wpm CW speed. The speed pot of the K2 however covers from 9 - 50 wpm with 30 wpm in the middle position. Thus the range which is useful to me is just a small fraction of this range.

In order to map 9 - 25 wpm to a larger range, one can add a series resistance to the pot, but this is cumbersome and requires cutting traces on the front panel bord. One could also change the speed pot to a logarithmic one, but this is also a rather involved operation. My solution was to emulate a logarithmic pot by soldering a 2.2 k resistor between the wiper and the CCW end of R1 on the Front Panel Board, the 5K Keyer Speed pot. In this way the pot stills covers the full range from 9-50 wpm, but 22 wpm is now in the middle position. See image for where the resistor is located. The left-hand wire can be found right under the G in "MIC CONFIG." (Note that the Manhattan-style circuit board to the upper right is a fixed level audio output and a zero-beat indicator).

If one had used an even smaller resistor than 2.2 k one could make the low speeds cover an even larger range of the pot, but I don't recommend this. In contrast to substituting a log pot, the added resistor makes the pot load the circuit more as the pot is turned in the clockwise direction, so that instead of 5 k load, it now presents 5 k in parallel with 2.2 k or about 1.4 k. I would not recommend loading the control circuit even more.
Posted by Sverre Holm at 12:00 No comments: Links to this post