A regenerative receiver for the 40 m band 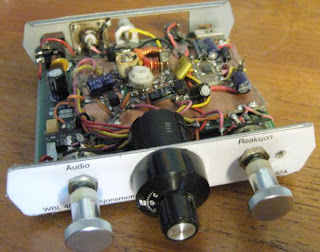 I've had a lot of fun with the modified WBR (Wheatstone Bridge Regenerative) receiver which I built Manhattan-style some years ago. The design builds on the receiver described by Daniel Wissell, N1BYT in QST August 2001. Although it doesn't match a good superheterodyne, you get more performance per component than in any other receiver!

Unlike other regens I have tried, it is stable enough to listen to CW/SSB. It is also easy to operate. Much of this is attributed to the small tuning range and the separate oscillator circuit. Mine tunes from 7.0 to 7.28 MHz.

The WBR is a regenerative receiver with good isolation from the antenna and with little interaction between tuning and regeneration controls. The WBR has a JFET detector and a separate oscillator for the regeneration, plus an LM386 audio amplifier. WBR = Wheatstone Bridge Regen, and that is the unique part of it, a sort of a balanced input circuit with very loose coupling to the antenna for minimizing radiation.

In my opinion the original design has too little audio gain even in Europe. I added that by using ideas from 7N3WVM. His receiver is basically the same receiver except for the Wheatstone bridge in the front-end. The modifications to the N1BYT design is the addition of audio gain (NPN transistor between JFET and LM386) and an audio gain control. Thus my version combines the best features of the original WBR 7 MHz receiver from N1BYT and some more audio gain and an audio pot according to the related 7N3WVM receiver. According to my check it has a sensitivity of around 30 uV.