QRPp is radio amateur jargon for communication using a transmitter with less than 1 Watt power output. That’s less than a handheld GSM mobile phone (max wireless range ~35 km) or a flash light. My Pixie 2 transceiver has so far contacted 15 different countries on 3.5 MHz CW. The first version from 2002 was made in an Altoids tin (picture later), but in 2010 I repacked it in one of the nice clear top tins from the 4SQRP (picture below).


It is based on the KnightSMiTe which is a surface mount version of the Pixie 2. Like the original design it consists of only two transistors and one IC. I have made the Pixie in two different versions:
The various additions and modifications are:
The receiver has a sensitivity of around 100 microVolts and draws about 10 mA @ 9V. It is very wide and there is no discrimination between upper and lower sidebands. If you tune to the incorrect sideband, the other station won't hear you as you will be transmitting on the wrong frequency. The sidetone is about 1.1 kHz.

Some data for receiver frequency vs resonator frequency as the variable capacitor is changed, transmitter frequency offset, current draw and output power: 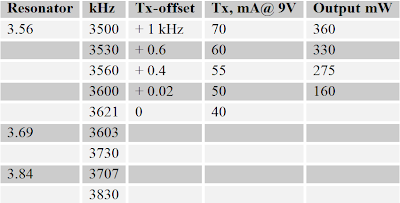 The first contact was made with LA3NCA, Kjetil, on 15 April 2002. On the third attempt I was able to tune my frequency so that he could hear my response, resulting in a 569 report over a distance of 30 km (!). I thought that was about as much as I could get out of a few hundred milliWatts, but I was lucky one weekend in the spring and stumbled upon a contest in the 80 m band. To my astonishment I have now contacted many other countries with it: Sweden (SM5 and SM6), Denmark (OZ), Finland (OH1), several German stations (DL), Estonia (ES), Latvia (YL), Lithuania (LY), Kaliningrad Russia (RV2), Poland (3Z), Czech Republic (OK), Scotland (GM), England (G), Belgium (ON), the Netherlands (PA). My record is TM5Y on the Island of Yeu, south of Brittany in France – almost 1700 km and with 0.3 Watts, this is 3473 miles per Watt.

The key to obtaining many contacts with QRPp equipment, in my experience, is not higher power, but the ability to tune. The usual mode of operation is to answer a call, and being locked to a single crystal’s frequency severely limits the number of contacts.

I have also tested a 30 m version of the Pixie 2, built Manhattan style. It has an input tuned circuit just like KX7L’s 20 m Pixie 2 in order to reduce broadcast interference. It can tune all over the 30 meter band since the oscillator uses a 10.2 MHz ceramic resonator pulled with a series capacitance. I have not been able to get its frequency stable enough that I dare use it on air. This is unfortunately in line with GM0RWU’s recommendation not to use ceramic resonators above 6 MHz due to thermal stability problems.
Main Pixie resource: The Pixie File, (from the pages of SPRAT - The Journal of the G-QRP Club).

My Pixie 2 modifications have also been published in SPRAT:
My Pixie2 with improved muting, more audio gain and sidetone seems to have inspired others:
This text was originally written in 2002 on my web page and has been updated several times since then. This blog post was taken from that page in order to enable discussions relating to the modified Pixie2. The first comments are all based on emails I have received over the years with questions and comments,  therefore you will see me as the author of these comments.
Posted by Sverre Holm at 11:26