Tweaking the K2 for digital modes

My Elecraft K2 which I assembled as a kit in 2001, has mainly been a CW rig, but now I wanted to use it more for digital modes like FT8 also. That required some tweaking: 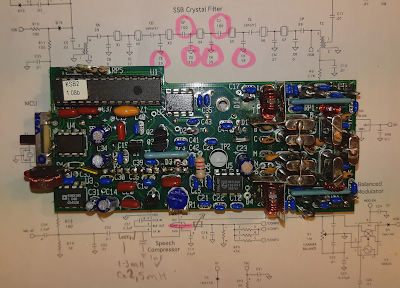 All of these are modifications to the tighly packed KSB2 board shown above so it took some patience to implement them. The bandwidth modification consists in replacing six ceramic capacitors that were sitting between the crystals. The VOX sensitivity modification is done by adding a pot which can be seen in the image as it sits outside the PCB on the left-hand side. I was lucky to find a mini 5k slider pot in my junk box which fitted in. Finally the RF-filtering was done by adding an inductor of 2.5 mH (right below the 5k pot) and a decoupling capacitor.

The barebone K2 has a limitation with continuous transmission and the manual says:
This should mean that it can do FT8 with its 12.6 seconds of transmission every 15 seconds at 10 W.

Finally, changing the SSB bandwidth meant that the BFO frequencies had to be set up again. It was fun to do this again as I haven't done it for many years now. Using the nice Java program from AB3AP, K2Params, for reading the K2 Control parameters, I was also able to read out out the new values for backup. Some of them follow here. The "RTTY rev" mode is the preferred one for FT4 and FT8.