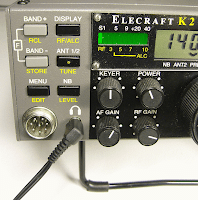 I started this guide when the number of modifications on the Elecraft email reflector started to overwhelm me, and I could no longer find modifications or determine whether they were important to do or not. After the K2 was revised in October 2002 (serial number 3000), this became much easier. Therefore the guide is organized into one primary and two secondary lists:
The first list consists of modifications that are meant to adapt the K2 to various user needs, or they are simply modifications contributed by K2 owners who found building so fun that they could not stop after the was completed. This section also covers a few performance modifications contributed after the serial number 3000 revision was done, some of which are now standard. Lists 2 and 3 will help you bring an old (serial no <3000) up to date with the latest modifications generated or approved by Elecraft.


In any case, it is highly recommended that you assemble the as is, tune it, and make your first contacts before considering any modifications. After you get some experience, you may go back to the list and consider the modifications.


I hope you will find the guide helpful and will have as much fun as I have had building, upgrading, modifying, breaking and fixing my K2 in addition to operating it!

Resources for understanding the

Resources for aligning and troubleshooting the K2

Resources for building and modifying the

The modifications presented here have not all been officially endorsed by Elecraft. They should not be implemented before the works and is tuned properly. Even though we try very hard, we cannot guarantee them to be correct. The authors of these modifications or the author of this web-page will therefore not be liable for any damage that they may cause to the . However, these modifications have all been implemented by home-brewers and we have no reason to believe that they will not give the desired effect in other K2s.
First version 22 Nov 2001.