Three paths from Japan to Norway along the grayline

The Japanese station JA3YBK was received in Oslo (press here for audio), 30. November 2003, 08:20 UTC on 21.004 MHz during the CQ WorldWide contest. The sound is reverberant due to the multiple copies that are received. This can be seen as extra signals, and it is in particularly easy to see after the first short dot (‘e’ in ‘test’). 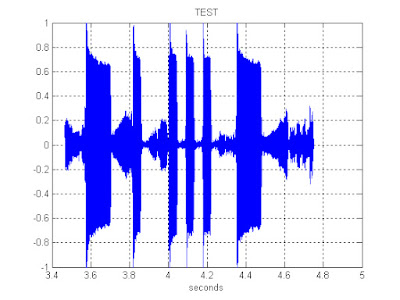 The next figure zooms in on the ‘e’. 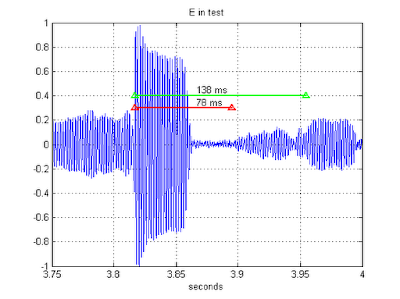 The third signal which starts at the end of the green line, is probably the short-path signal with an extra round around the earth. As the earth’s circumference is about 40 000 km, it is delayed by about 40000/300 000 ≈ 133 ms (or rather 138 ms which is the established round-trip time, taking into account an additional 1400 km path length due to reflections between the ground and the ionosphere). As the AGC was on (in Fast mode on my K2), one cannot make amplitude comparisons of the echoes.

On 30 November 2003 the sunspot number reached 116, much higher than the smoothed average for 2003 which was 63.7. But as propagation is only weakly correlated with daily sunspot numbers (see "Correlation Between MUF and Solar Flux" on C. Luetzelschwab K9LA's excellent propagation site), this only partially explains the unusual propagation.

(A Norwegian language version of this report appeared in Amatørradio in september 2007: "Trippelekko fra Japan")
Posted by Sverre Holm at 00:00