How to make a very cheap VHF receiver

What is the cheapest receiver you can make for VHF? Here is a candidate where all you need to do to modify a small FM headphone receiver is to desolder one end of two capacitors, and connect a short cable with an antenna connector.


I have not tried this with other chips, such as the SC1088 = TDA7088, or the TDA7000. Both the Philips chips are specified for 1.5-110 MHz, but who knows how high in frequency they will cover? I would be interested to hear from others who try to convert other single-chip FM receivers.

This article was originally published in SPRAT - the journal of the G-QRP Club - Winter 2004. I wrote in Sprat that I would be interested in hearing from others who try to convert other single-chip FM receivers. Ha-Jo, DJ1ZB then wrote and said that he had been successful in using the TDA7000 for a VHF receiver. Also Pete G1INF wrote about his experience in using the TDA7088 for a 40 m direct conversion receiver, so HF operation is also possible. I have now made such a receiver myself also with success. More details of this kind of conversion can be found on Hans Summers page about conversion of a Poundshop FM receiver to 40 meters, where I also contributed a small amount.

This blog post was taken from the SPRAT article in order to enable discussions relating to the circuit. The first comments are all based on emails I have received over the years with questions and comments, therefore you will see me as the author of these comments. 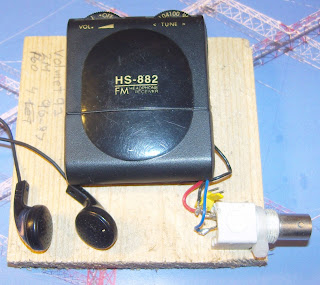 Added 16 April 2012:
Here's a picture of the "HS-822 FM headphone receiver" giving an impression of how it looks. The BNC connector to the lower right is the new antenna connector.
Posted by Sverre Holm at 18:47