The LM386 must be one of the most popular audio output amplifiers among radio amateurs, despite having been around for a long time. It's an IC which even has its own Wikipedia page. The LM386 can be obtained in both dual-in-line and surface-mount packages and outputs 325 mW in the standard version that runs from 4-12 Volts supply voltage.

Its voltage gain of 46 dB is in many cases too little, especially in direct conversion receivers. When I built the Pixie 2 with the LM386 audio stage, it struck me how the sensitivity of the receiver was limited by the audio gain. I asked myself if it would be possible to increase the gain and add some filtering in a simple way. The result is a gain of more than 70 dB and an audio bandwidth of a few hundred Hz by only adding 5 passive components to the standard circuit: 3 resistors, 1 capacitor and an inductor.

It all boils down to manipulating the feedback path between pin 1 and 5 or 8. The LM386 data sheet says “Gain control can also be achieved by capacitively coupling a resistor from pin 1 to ground.” The effect of a low value resistor here is to decrease feedback and increase gain. JF1OZL has measured the gain with various resistors and by going as low as to a 3.3 ohms resistor, he got 74 dB gain. 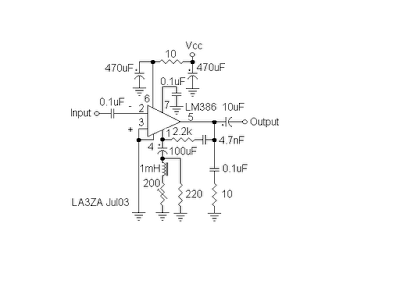 In my circuit, all the additional five components are connected to pin 1. Four of them make up a new path to ground: The 1 mH inductor and the 100 uF capacitor resonate at 500 Hz. In combination with the 220 ohm resistor, which is there to ensure stability, and the 200 ohm pot both the gain and the sharpness of the resonance can be controlled. Instead of having a feedback capacitor between pins 1 and 8, it now goes to pin 5 via the fifth added component, a 2.2 k resistor. A more detailed explanation of the circuit, with measurements of gain and frequency response can be found in my article in SPRAT Autumn 2003.

[Added after the SPRAT article was published:] One word of warning is prudent here. As the 200 ohm pot approaches zero ohms, the amplification becomes so large that the series resistance of the 1 mH inductor and the ESR (equivalent series resistance) of the 100 uF capacitor in combination with the open loop gain of the LM386 will determine gain. Some of these values are unspecified for standard components and may vary a lot. Therefore such a setting is not recommended for use in mass-produced circuits. However for a hobbyist's one-of-kind circuit it should be fine.

In summary, addition of a few components to the basic LM386 amplifier results in a response which is fine for CW reception with a peak in the 500 Hz range. The amplifier also has enough gain for a direct conversion receiver with a passive mixer like the Pixie 2, that it in many cases it can drive a loudspeaker. Hopefully, the circuit can benefit other direct conversion receivers also.